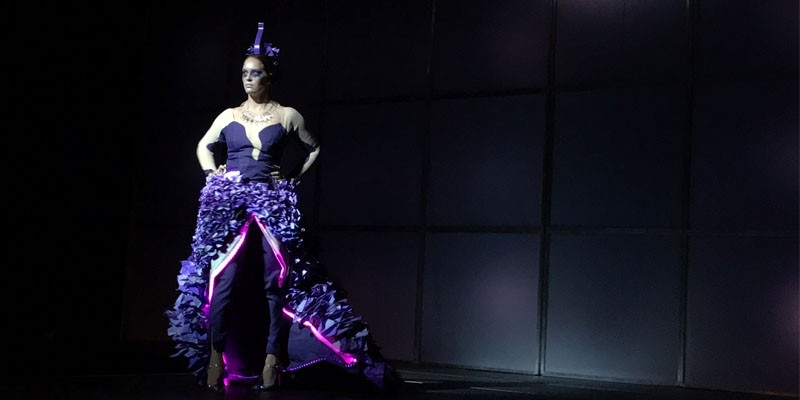 "Human emotion is raw and complex. Circumstances can mount against us and cause us to become vexed, tormented, agitated to the point of just utter chaos. We can ignite with anger and frustration, which brings to mind the Phoenix, a mystical creature of strength and beauty.”

This year’s IIDA Dressed event included yet another show-stopping performance by the CBRE | Heery Atlanta interiors group. The annual fashion show is one of IIDA Georgia’s largest events. Each year teams of interior designers from around Atlanta partner with industry manufacturers to design wearable garments from contract materials.

Dressed 2018: Colour in (e)motion challenged teams to fashion a red-carpet ensemble that captures a specific feeling and emotion using a color. Over the summer, each team was assigned one color they must use with one action word and emotion.

CBRE | Heery was assigned purple and drew inspiration from ancient Greece where the Phoenix was associated with the Phoenicians, a civilization famous for their production of an expensive purple dye. Ancient folklore tells that toward the end of its life, at the height of vexation, the Phoenix ignites itself in a nest of flames and dies in a plume of smoke only to be reborn and transformed into a new creature with a bold, commanding presence. Sponsored by Behr Paint, MAP Contract – LUUM, and Next Generation Lighting, the Dressed team expertly chose upholstery, lighting materials, and purple paint as the elements used to define the creature’s convoluted nature with the words vexed and ignite speaking loudly throughout the garment’s shape and cut. 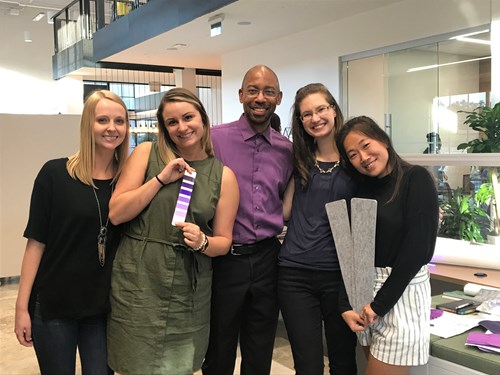 On the evening of September 20, the team’s ingenious design was unveiled at the Historic Atlanta Tabernacle. A fiery vision of purple hues paraded the runway drawing the audience into a vexed wonder. The headpiece, made from acrylic diffuser film, is in the shape of a flame, which is seen throughout the dress as a nod to the verb ignite. The team compared the word vexed to pointed angular shapes. This idea is brought to life in the organic, abstract paper plumes in a mixed gradient of violet that line an angular-shaped skirt. This then transitions into a dramatic train where plumes of various colors and sizes give off an unyielding sense of chaos. The purple pants pay homage to the iconic pantsuit – a fashion statement brought to popularity by today’s feminist movement giving the garment a sense of power.  Finally, in a surprise twist, the skirt “ignites” on stage through a programmable LED tape light, symbolizing transformation. 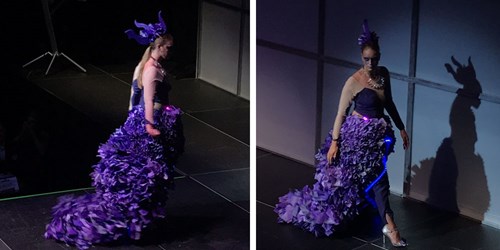 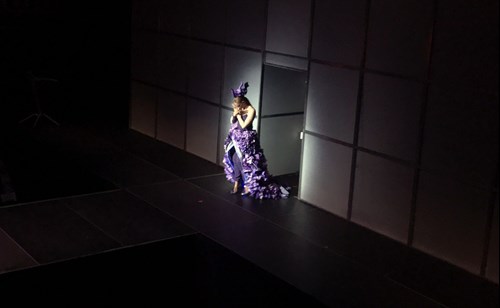 The mission for Dressed is to give designers a unique opportunity to unleash their creativity in a runway extravaganza like no other. The event allows interior designers from across Atlanta to connect with the local architectural and design industry as they work together to create one-of-a-kind, wearable garments made almost entirely from their sponsoring manufacturer's products. Proceeds from the event are donated to Dressed for Success Atlanta, a nonprofit that provides career advice and professional clothing for low-income women in 75 cities around the world.